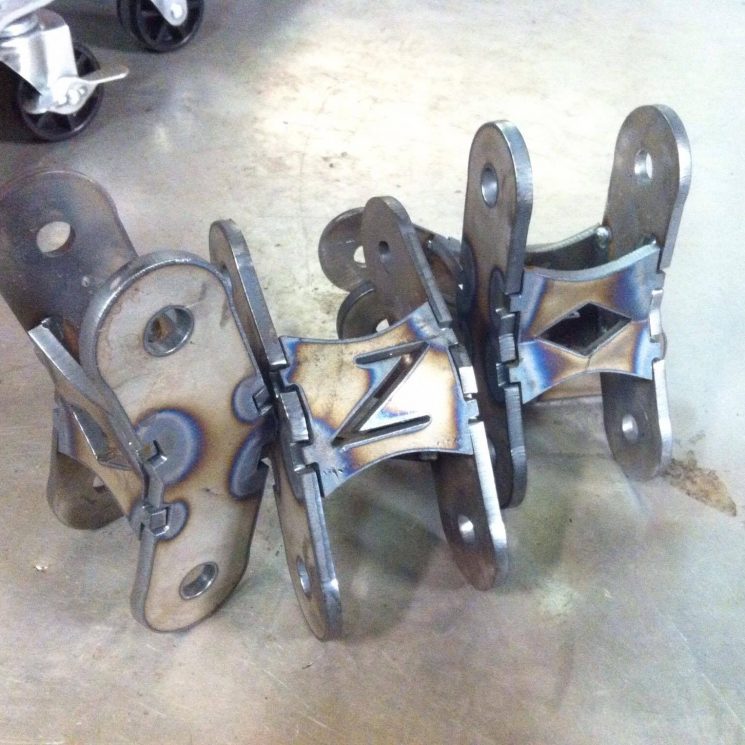 A summary of how different shackles can impact a leaf spring suspension.

What is a shackle?

A shackle is an integral component of the suspension system that attaches between the leaf spring and the vehicle frame. It allows for the leaf spring to work through length changes during suspension articulation. The leaf packs, or leaf springs, position and center the axle under the vehicle. They also support the vehicle’s weight, since these are a primary component of the suspension system. As a leaf spring flexes up or down, its length from main eye to shackle eye changes. Since one end is mounted solidly (the main eye), and cannot move, the length changes happen at the shackle end of the leaf pack.

What are the pros/cons of different shackle lengths?

Starting with factory length shackles, there are several things affected by a change in shackle length. A longer shackle will move one end of the leaf pack down, further away from the frame and will result in the following effects.

How does a longer shackle affect wheel travel?

What is shackle inversion, and why is it a bad thing?

Shackle inversion can happen on vehicles with front leaf sprung suspension systems. When the suspension has dropped to its maximum point, it is possible (although rare), for the shackle to fold the opposite direction of standard movement. If this happens, the spring length can shorten dramatically and potentially cause severe damage and/or component breakage.

A simple solution if this happens would be to unload the suspension (max drop) and use a lever to move the shackle towards the correct side of the leaf spring. Use extreme caution if you try to do this without unloading the suspension first.

An easy solution to keep shackle inversion from occurring would be to install stops to prevent the shackle from moving too far back. This will have a direct effect on maximum axle drop however.

Why do some shackles have braces welded in while others don’t?

The braces welded between the sides of a shackle are generally used for stability purposes. The longer a shackle becomes, the more likely it is to flex side-to-side during suspension movement. As the leaf spring moves up and down, it will also move inward (upward movement) or outward (downward movement). This is due to the fixed motion of movement of the axle under the vehicle. The shackle bushings allow this movement to happen easier and more fluid.

As the shackles twist with the motion of the leaf springs, one arm will sit higher than the other. The bushings help keep this offset equal by allowing slight give under stress. By adding a brace between the shackle arms, this will eliminate the twisting motion of the shackle and force the bushings to absorb more of the suspension load. This will also transfer a higher percentage of the suspension load directly into the frame mount section.

A braced shackle would be the top choice in all leaf sprung suspension systems. The increase of strength and handling is worth purchasing this style on its own.

Shapes of Shackles and their effectiveness

Shackles started out as simple, straight pieces of metal. These were bolted on in the same fashion as today’s shackles. Since the start of their use, many different designs have been prototyped and released for consumer use. The most common in the 4×4 world are tow shackles, boomerang shackles, heavy duty shackles, and greasable shackles.

Tow Shackles are fairly simple in design. They are the same as a standard braced shackle, but with the exception of drilled holes to allow a tow bar to be secured into place. The tow bar is used for flat towing. Occasionally a person may install these backwards and use the towbar mount as a type of shackle stop to prevent inversion.

A boomerang shackle was first designed to be used on the rear of the YJ Wrangler. Due to the Jeep’s design, the leaf spring’s movement would cause an issue of contact between the spring and the rear crossmember. Having this type of interference would reduce wheel travel. Boomerang shackles can also be used on the front leaf springs in an effort to reduce shackle inversion.

Heavy duty shackles are essentially a beefed up version of a regular shackle. Thicker metal and a heavier brace is used to increase the strength of the shackle. These would be the best to use for extreme off-roading conditions.

Greasable shackles are simply a unit that either comes with special bolts, or has a special zerk fitting that allows the bushings to be greased. Greasing a polyurethane bushing will greatly increase life and help decrease friction build up during suspension movement. For the enthusiast that finds themselves offroading often, these would be a great investment.