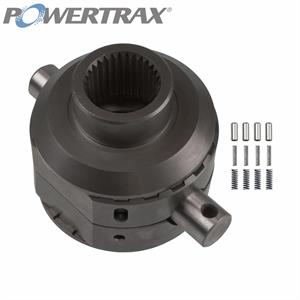 In the sport of offroading almost inevitably the conversation turns to improving performance.  When offroad an important keyword is traction.  Better traction generally boils down to four components, your tires.  Quality tires designed for offroad make a world of difference in your ability to find traction and have fun.  But if a tire is not turning due to a lack of power being sent to that tire, the best tires in the world won’t help you.  That’s where the right differential makes a difference.   This article will attempt to explain what role your differential plays in traction and the different types of differentials available on the market and how they will affect your vehicle’s traction and handling characteristics.

The differential in a vehicle is located in what is sometimes called the “pumpkin”, or that center section of the front or rear axle that intersects with the drive shaft.  Within that center part of the axle is contained the differential.

The main purpose of the differential is to allow each half of the axle (each tire) to spin at different speeds, while supplying an equal amount of force to each wheel in that axle.  The need for the wheels to rotate at different speeds is especially apparent when turning corners.  When cornering the inner wheel travels a shorter distance than the outer wheel.  With an open differential they both propel the vehicle forward with equal force, so long as both wheels remain in contact with the road and have traction.  However if one wheel slips, for instance on ice, more torque is sent to the wheel that spins. If that slipping wheel completely looses traction, all power will be sent to that wheel and you have no forward momentum.   When offroad, this is where the common open differential fails to remain effective.  When offroad there are many situations where a wheel will spin free.  In most stock 4×4 vehicles the common Open Differential can be found in both the front and rear axles.  When a wheel in the front AND a wheel in the back are allowed to spin free due to the Open Differentials, that 4×4 is essentially a 2 wheel drive vehicle.  One front wheel, and one back wheel.  This is where other types of differentials will make drastic improvements to traction.

The standard differential, or what is referred to as an open carrier, is what comes with most OEM vehicles.  The open carrier holds the ring gear in place and within the open carrier is generally a set of gears called spider gears.  These spider gears are responsible for allowing a vehicle to negotiate a turn and allow the outside wheel to travel farther and turn faster than the inside wheel.  This type of open design works great for most of vehicles on the road today.  However when a vehicle with an open differential meets a lack of traction, it directs power to the wheel with the least amount of resistance. The result is the wheel on the traction-less surface spins free, while the opposite wheel of that axle on the better traction surface provides little or no power.

A locking differential or “Locker” uses a mechanism that allows left and right wheels to “lock” relative to each other and turn at the same speed regardless of which axle has traction and regardless of how little traction a slipping wheel has.  In this state, the axle acts more as a “Spool”.  This means traction can be sent to a wheel that may be planted firmly on the ground while the other wheel of the axle is completely off the ground.  In this situation an open differential will spin the free (lifted) wheel sending absolutely no torque to the wheel in the ground.  A limited slip in this situation will send some torque to the wheel on the ground but possibly no enough to provide any forward momentum.

Lockers use various mechanisms to provide lock-up and can be divided into two categories, Automatic Lockers and On-Command, or selectable Lockers.

Automatic locking differentials are designed to lock both wheels of an axle automatically when torque is applied so that both wheels are providing power.  When torque is not being applied such as when the clutch is press down, the differential is allowed to unlock, permitting a variance in wheel speed while negotiating turns.  Automatic lockers tend to create odd handling characteristics on the street as they lock and unlock and take some getting used to. 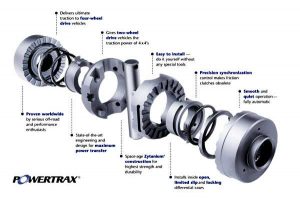 Spools are actually the lack of a differential.  Spools are a 100% lock-up between both wheels of an axle all the time.  Spools are generally used for racing and serious offroad use where little or no street driving is seen by the vehicle and a stronger, lighter rear end is needed.

At ABS Offroad we carry most popular brands of lockers. We are the authorized dealers for all powertrax products in the Caribbean and continue to provide support for all products we distribute.